We cordially invite you to the sales exhibition of graphics by Vladimír Gažovič.

Vladimír Gažovič has already tended to fantastic realism during his studies. In his work, he develops a line of imaginative approach based on symbolism, art nouveau, expressionism, surrealism and new artistic currents. His work is dominated with a figurative focus. Against the background of the relationship between man and woman, he reveals the moral and ethical values ​​of the contemporary man oppressed by material pleasures. He is a suggestive narrator who, by means of the names of his works, indicates the direction of his thoughts and thus directs the viewer in complex and rich pictorial symbolism.
The author captures the grotesqueness of human existence, which often has a bitter taste. In subtle irony, he points to hypocrisy, mammonery, or false chastity. He likes to work with a structured surface, which he contrasts with an almost realistic figure. One of the significant themes to which he returns in his work are Tributes not only to artists, but also to other important personalities from the history of culture. Gažovič's honors are an expression of his personal recognition, but also a form of revolt and support for many well-known and officially unrecognized personalities of the past and present.
Gažovič quickly transitions from early gravure graphic sheets to lithographs. This shift was mainly initiated by a stay in Vienna, from which we date his experiments with color lithography. In this technique, he developed new possibilities that enriched European and world graphics. He mainly developed the technique of applying and layering colored ink stains, spraying and covering, as well as combinations with lithographic chalks. Therefore, he absolutely rightly has the title "master of color lithography", which was awarded to him by his teacher Vincent Hložník.

Vladimír Gažovič studied at the Academy of Fine Arts in Bratislava at the Department of Graphics with Professor V. Hložník (1961-1967). In the years 1969-70 he won a Herder scholarship at the Academy of Fine Arts in Vienna with prof. Maximilan Melcher. It was this stay that opened up new possibilities in use of color. In 1979 he completed an internship at the Academy of Fine Arts in Amsterdam. In the years 1967-82 he worked as a teacher at the Department of Graphics VŠVU in Bratislava.
The author focuses mainly on lithography. The artistic and technical originality of his works were appreciated at the world's most important exhibitions of art graphics. In addition to graphic design, he is also dedicated to drawings, paintings, illustrations and sculpture. 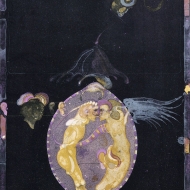 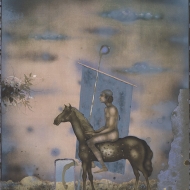 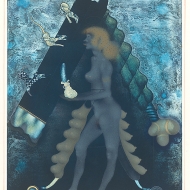 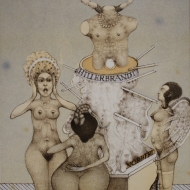 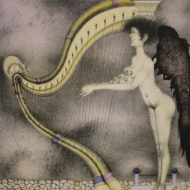 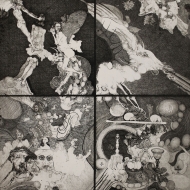