Dušan Polakovič&#39;s work is like leafing through life with a humorous undertone. In his presentation, common experiences are transformed into an unexpected&hellip;

Dušan Polakovič's work is like leafing through life with a humorous undertone. In his presentation, common experiences are transformed into an unexpected form, which is accompanied by a number of bizarre characters. A sensitive ironic view creates a whimsical world in which nothing is serious and anything is possible. We do not find peace here, but on the contrary the strong energy of life and the joy of being as absurd as possible.

During his studies, Dušan Polakovič mastered the high quality of drawing, which he transformed into graphic art. As a pupil of Albín Brunovský, he was initially inspired by Dutch art of the 16th century, but later nature became his great muse. He admired it immensely and at the same time expressed his criticism of its destruction through his works (Attention reservation, Tribute to G. Durrell). He also portrayed his hometown Bratislava in an unmistakable way, where he combined its history, known and unknown characters and bizarre experiences on a graphic sheet, which directly attract us to visit it. In his other works, we find references to historical and mythological stories that mix with fictional scenery. In the end, everything mixes with everything in a satirical concept that encourages us viewers to have an open and unencumbered view of the world. Because only with open perception can life show us its broad spectrum and unlimited creativity. Only then can we take serious things with humor and perceive life as one big theater. And maybe that's one of the legacies of Dušan Polakovič's work... 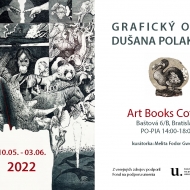 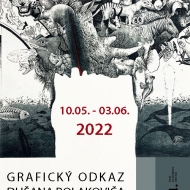