František Lipták is&nbsp;on the art scene famous for his original view of the world. The author is able to perceive situations in contexts that others&hellip;
We use cookie files for the purpose of visitor analysis and in order to suit our website to your needs. By using our website you agree with the storing of cookie files on Your computer, tablet or smartphone.

František Lipták is on the art scene famous for his original view of the world. The author is able to perceive situations in contexts that others do not see. His main inspiration are quite common things, which, however, often escape us in today's world of perceptions. In combination with titles, the author facilitates his mediated view of the world around us, where even serious things find themselves in the field of lightness and wit. However, it should be added that the cheerfulness in his work is far from superficial.

František Lipták is often associated with an eye-catching person who finds himself in various life situations. His work and creativity, however, goes far beyond the painting scene. In addition to painting, Lipták devotes himself to theater and film scenography, illustrations, graphics and objects. Many of the artist's works are based on observations and sketches, which he often records in various sketchbooks. The sketchbooks themselves become artistic objects full of creativity, drawings, excerpts from conversations and spontaneous ideas. And these notebooks became the inspiration for the exhibition “Drawn Sketchbooks”, which represents a more complete view of Lipták's work. At the exhibition you will find linocuts, paintings, sculptures, as well as a sample of book illustrations and a set of scenography for the animated film Lajka, for which Lipták together with A. Klimt and M. Velíšek won the Czech Lion in 2017. At the same time, the exhibition confirms that František Lipták's complex work goes far beyond the bounds of painted funny stories.

Lipták's works can make you laugh but also give you a chance to think. On the other hand, as he said, "Without an idea, it is useless to paint". However, in his case, fortunately, there is really no lack of ideas. Sometimes, even canvas is not enough, so he creates on whatever comes into his hand, whether it is a wooden board, chair, wardrobe or books themselves. His creativity really has no boundaries and his art world is open to all who can at least for a moment "shut down" and be carried away by a stream of unlimited imagination.

WORKS FOR SALE FROM THE EXHIBITION HERE. 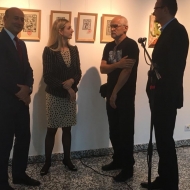 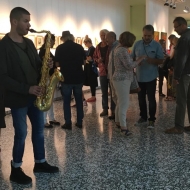 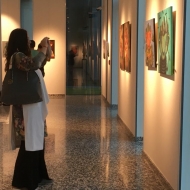 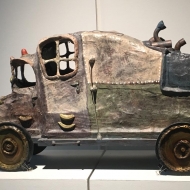 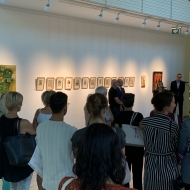